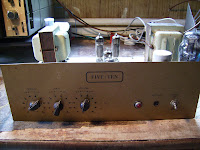 One of my colleagues has just given me this valve (tube) amplifier built from a kit based on the Mullard Five-Ten design published back in 1954. Though this design is still being built by audio enthusiasts today, it seems this one is the genuine 1954 article. It's far from working condition though, so it's going to need a fair bit of work and a few replacement parts.
As it's likely this will be an extended project with a few stops and starts as I seek components - I don't really like to buy new, because it's expensive, and because new parts often don't look right - I'll be keeping notes in my mullard-five-ten wiki page. 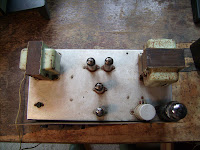 Here are a few more "before" photos. Things to note are that this kit uses the higher power rectifier option of the GZ30. The quality of construction of the chassis is good, so it was certainly built from a kit. The quality of the build is competent, but not great. 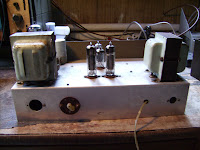 From the rear we see the two EL84 output valves, these look as though they've been very, very, hot and a check of the output transformer reveals the primary is open circuit. Between the output valves can be seen the ECC83 phase splitter and behind that the EF86.
There's also an empty hole (far left) that's exactly the right size for a Bulgin 3 pin mains connector. 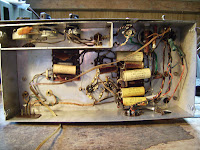 From the underside we can see that there are some very old electrolytic and paper capacitors. Note that the dates on these are "JUL 53". 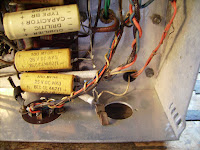 A closer view of the hole for the missing Bulgin mains connector. It seems there was once an earth tag here that has been replaced with a picture hook!