Adding a stereo demultiplexer to the Leak Trough Line 3 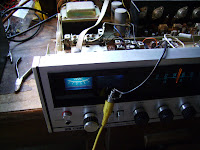 When I bought my first Trough Line 3 on Ebay a few weeks ago I did a little googling and found this article on replacing the stereo decoder in the stereo version and this one on an external decoder. It struck me that 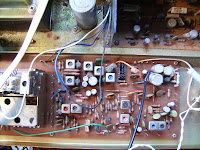 converting a mono tuner to stereo might be a fun project that could be achieved fairly cheaply with salvaged components. All I needed was a tuner with a stereo decoder, which I had. Fortunately for the Sony, before I ripped it apart an older manually tuned Chinon receiver came up on Ebay locally, so I grabbed it for a fiver. Here it is accepting the multiplex output from the Trough Line. 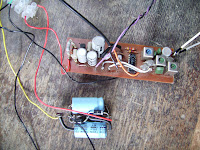 Being a fairly ancient receiver, mid 70s I guess, the stereo demultiplexer chip was the only IC in the box, so fairly easy to spot, a mix of tracing the wiring, from mono/stereo switch, stereo indicator lamp (N.B. lamp, not LED), voltage checks and poking the pins with the CRT revealed what did what and the fact that it used a single 12V supply. I reckoned the easiest way to get it into the Trough Line would be to cut out what I needed from the circuit board using a hacksaw. So that's what I did! Here it is with a voltage doubler power supply taking 6.3V a.c. from the Trough Line heater supply. 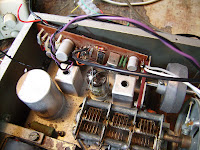 So far, so good. Now to try and fit it in the Trough Line. The obvious 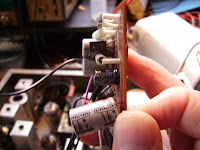 thing to do is to put it where the decoder is fitted in the stereo version. Wow, it fits! But it's a tight fit. Looking at the board more closely reveals that the tallest component is the smoothing cap for the regulated power supply. A modern cap of the same value taken from an old PC motherboard is half the size! 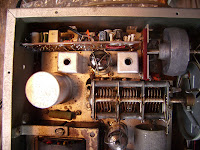 That done the installation can continue. I decided that screening probably isn't necessary. Perhaps I'll be proved wrong on this later. The voltage doubler goes underneath. Done! 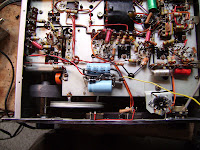