Messing about with capacitors 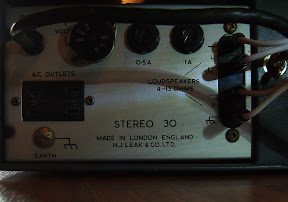 After a couple of messing about with valves posts I was going to call this messing about with transistors, but mostly it has been capacitors. My wanderings through my electronic junk has now reached the 1960s. Again the challenge is what to keep and what to get rid of. Fortunately I've not kept much from this era, the age of black and white TV, transistor radios, and FM. I've got one item to sell, so on to Ebay to check prices and see what's hot or not. Errrmm, interesting maybe there's more to the 60s that I thought - British hi fi seems to be selling well, but with some bargains too. The temptation was too great so I snapped up a Leak Stereo 30 amplifier and Trough Line 3 tuner. These were described as "in good condition", which I took to mean complete, but not working. I reckon it was worth the (not much) money to have a couple of boxes with MADE IN LONDON ENGLAND on them to mess about with.

A few days later the postman struggled to the door with a large box. I quickly unpacked the box and opened up both cases. Everything seemed present and correct, so off they went to the workshop.

The tuner worked perfectly, sure it needs more signal than I have at present, a better aerial is needed.

As for the amplifier, the left channel worked but not the right. So I clipped a lead across the wipers on the volume control and the right channel came alive. Both power amps were fine, so the problem was with the right pre amp stage. A glance at the circuit diagram shows that there are two routes for the tape amp input one through the pre amp, and one direct to the power amp via the tape monitor switch. However plugging a Sony tuner in and flicking the tape monitor switch gave output on the right but not left! Tracing the signal showed the fault here was with the hi/lo slider switch on the rear panel. Replacing switches that will most likely never be used seemed pointless, so I just soldered all the hi/lo switches to the lo setting. That done I traced the signal through the the right preamp. It vanished at C16R! So something was wrong at T3R. The capacitor didn't look quite right, the plastic cover was clouded, so I pulled it and replaced (25uF, 25V axial). Still no joy. Checking the voltages around T3R showed they were very wrong, emitter at almost 0V. C17R (125uF 10V axial) was also faulty, replaced and now everything is fine!!!! Interesting that C16 had failed open and C17 closed. Odd things electrolytic capacitors. Perhaps I should replace them all, but it seems like a lot of work for little gain. 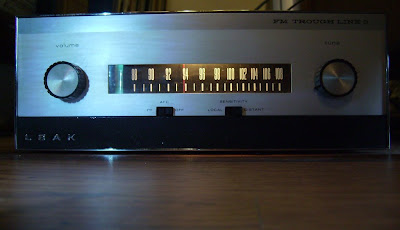 Here's the tuner. It's mono so I'll have a go at adding a stereo demultiplexer soon. I think I'll try and take one from another tuner (maybe the Sony), rather than build one with new components.
at 8:57 am