It's Not For Crows - more NFC dabbling

Back in March I wrote about some simple experimenting with the  ST M24LR Discovery kit which feature a dual interface EEPROM - both NFC and I2C.  That kit got me thinking about how I might use NFC to move data to and from low cost devices.  Not just storing data on a tag, but mini data loggers and the like.   So I ordered a few parts to experiment with and yesterday I finally got around to building some I2C/NFC tags.  Here's one - 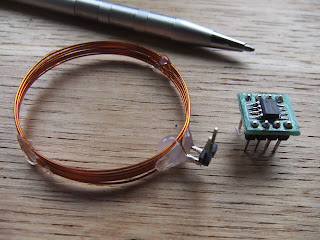 I wound my own antenna.  It this seems bizarre, consider that I grew up making crystal sets and the like - why would I miss the opportunity to wind a coil?  For anyone wanting to do the same,  it's 8 turns around a 4cm diameter former - in this case a plastic lid from a spice jar.  Slip the windings off and apply a few dabs of hot glue and it's done.  So far all I've done with this is read and write to it with my Nexus 7 tablet (NFC) and an Arduino Uno (I2C).  With this EEPROM no power, indeed no connections, are required when using NFC, just the antenna coil.
There was no particular project in mind when I assembled the parts, which is why I included the 0.1" pitch connectors to plug them into a breadboard.   What I notice once they were on the desk it that it's an ideal size to include in a Raspberry Pi case.  So I built another slightly different one. 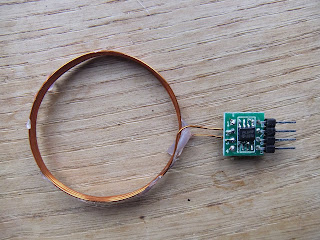 This will fit inside the usual cheap type of case. Making this got me thinking about making a smaller one closer to the size of the pre-made tags you can buy but with the advantage of I2C.  So I built this - 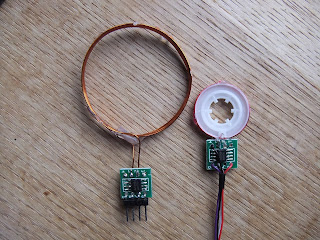 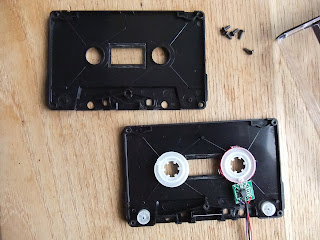 Yes,  I reckon I'm going to build something gadgety into a cassette tape.  Not sure exactly what, but pretty sure it will use an ultra low power MSP430 microcontroller.
As for the Raspberry Pi interface, what I'd like to do with that is use it to change settings that are loaded on rebooting - so I can set up Wifi access codes using a phone or tablet, ideal for a "headless Pi".
at 8:54 pm 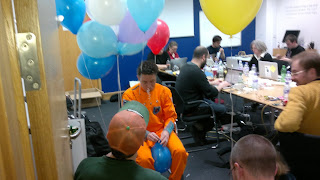 What an amazing event!  Described by some as "a contest" - science.nbcnews.com though conceived as a hackathon in the Random Hacks of Kindness model.  See theatlanticcities.com for a different take.

Thanks to some incredibly enthusiastic and hard working colleagues the Met Office was able to host both Exeter and London events.

If you've never heard of hackathons or hack-days then most likely you don't work in IT, or you do, but don't surf the web, use social media, own a cat...  please keep reading.

For those who work in IT and haven't been to a hackathon -  it's like a free training course, with beer and good company.  Why do I say it's like a training course?  We'll it isn't really, but experience now tells me there's one type of IT guy (always a guy) it doesn't suit -  the one that already, thinks he, knows everything.

For those who aren't IT experts, and more and more are coming to such events, a hackathon is a chance to meet some really cool people who like making digital stuff, and prefer prototypes over long winded presentations and reports.  At a hackathon you'll see impossible ideas turned into amazing examples of digital genius.

What am I going to do next?  We'll I don't have total control of anything much, but I'm always happy to share ideas and try out new things.

Now some quick notes to self -

What I'd really like to do - so will put some effort into, and yes do contact me if you'd like to help - is create events that wouldn't happen otherwise.