Messing about with valves (tubes)

It's been months since my last blog posting, so there's not a chance of covering the many random things I've been up to of late.

Actually there are a couple of posts that I didn't finish, so never posted. Back in March I nearly posted about my largely unsuccessful efforts to spring clean the garage (well workshop come junk store).

I've got a very large stash of electronic 'stuff'. My stash includes crystal set components from the 1920s, a couple of working 1930s battery powered wireless sets, mains sets from the 1930s, 40s and 50s. There are many other 'treasures' including test equipment such as Avometers, and a Mk 1 Avo valve characteristic meter. And of course lots of components such as valves, connectors, even pieces of wire and nuts and bolts. Most of it is mixed up in large cardboard boxes in the garage and attic.

So how to deal with all this stuff and sort the junk from the treasure? There are certainly a few things that I believe to have some value, the Avo valve characteristic meter and the Ferrograph tape recorder. A couple of 1950s bakelite cased radios, both with cracked cases - they can't be worth keeping - off they go to the local auction. What about the two RF signal generators? Maybe I should keep one (now you can see how I come to have so much stuff to start with). I've decided to keep the TE20D and sell the ancient Triplett 1632 (it made £16 at the auction).

Well I did eventually get around to throwing out some the junk, after many enjoyable hours salvaging things I might find useful, motors from disk drives, crystals and sockets from computer motherboards, and other interesting (to me) bits and pieces. Along the way I got the Avo valve characteristic meter working, and even tested a few ECC82 and ECC83 valves to replace the broken ones in the Ferrograph - so that now works again.

As a consequence of these diversions I've now set up another website, Wireless Words, and a wiki, self-aware.

So on Saturday I took the van, loaded with scrap metal, circuit boards, and other rubbish to the "recycling centre". Where I discovered this "treasure" - 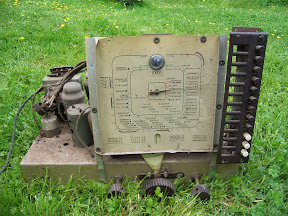 It was mine for one pound! OK, so I bought some rubbish, but it's interesting rubbish. A 1930s wireless set with push button tuning and a "magic-eye" with sockets for pickup and television sound. Being as geeky as I am I could tell it was pre-WWII, but probably only just. Well it turns out it's a 1938 set, here's the evidence - 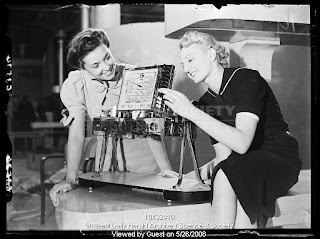 Thanks to the Science and Society Picture Library. It would be fair to say I've got no idea what I'm going to do with it. But the motorised tuning mechanism lends itself to a remote control system of some sort. A computer controlled valve wireless perhaps.
at 4:23 pm