The answers to that question

More Views on Interplanetary Communication
"CATHODE RAY," in a postscript to his letter which is printed on page 271, writes:—
IN my capacity of Member of the Wireless World Brains Trust, and referring to the question of whether there are any inexplicable radiations reaching us from outer space, I recall that in 1933 Karl Jansky reported in Proc. I.R.E., as a result of at least a year's experiments, that he obtained continuous reception of radio waves from a certain stellar region. So far. as I know, this matter has never been cleared up. -
ARTHUR C. CLARKE, Hon. Treasurer of the British Interplanetary Society, adds a note :THE fantastic figure of six million kW, quoted as necessary to produce a 5 microvolt/metre field on the nearest planet, presumably relates to spherical radiation, which no one for a moment considers. The use of beam technique would reduce power requirements to a minute fraction of this. Moreover, there seems very good evidence that radio waves from comparatively low-powered transmitters have travelled distances which are almost interplanetary. The existence of echoes of several seconds' duration (equivalent to the distance of the moon) is well established, and delays of up to ten minutes or so have been reported—corresponding to distances of several times those of Mars or Venus at perigee.
Secondly, the evidence that radiation reaches the earth from space is quite strong, and I am surprised that your contributor did not mention it. I refer to Jansky's reports on the subject (Proc. I.R.E., Oct., 1935). Jansky reports this " star-static ''as lying between 9-21 Mc/s and being 10-30 db. above the level of thermal agitation. (See also Jansky, Proc. I.R.E.. Dec., 1937, and Friis and Feldman, Proc. I.R.E., July, 1937, for a further discussion of this matter.)
Finally, if radio is incapable of really long-range communication (which I doubt) the solution to the problem lies in the modulated light beam. Light can be focussed with extreme accuracy and the sensitivity of a photo-cell collecting light at the focus. of a giant reflector, and backed by an electron multiplier and the usual amplifying stages, is so enormous as to be almost meaningless. It is certainly capable of maintaining communication between all the planets in so small a space as the Solar System! As to the objection that most planets have opaque atmospheres, I would answer that all except Venus have airless satellites very close to them to which they could be linked by UHF.
at 7:28 pm

After a failed attempt to "win" what looked to be a valve-less Mullard 5-10 chassis in the hope of getting a replacement output transformer for my 5-10 at a reasonable price I did a bit more googling on the topic of transformer rewinds. Somewhere in the many forum posts I found a mention of checking for failures where the transformer windings are joined to the connecting 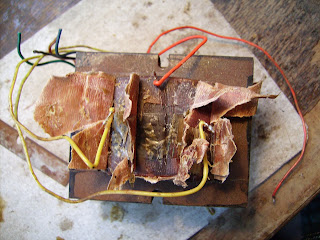 leads. Given the style of transformer I've got, this seemed worth a check. So I opened it up carefully removed the outer layers of tape. In the picture you might be able to make out that the connections to the yellow wires are good but all four strands that should have been connected to the red centre-tap had failed. There was some charring and a little bit further away from where the connection had been some green traces. Further poking around and I had all four strands again. A little shorter than originally, but by scraping off the enamel I was able to test for continuity. Three of the four windings were OK. I don't know enough about transformer winding to know why each half of the primary was made up of two parallel w 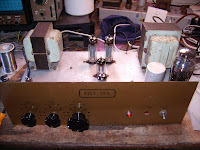 indings, or why for the half that still had two good windings (I presume they were both good) one had a higher resistance than the other. Anyway I decided to use the two of the three good windings with the nearest resistances. Put it back together, and hey presto, a working "five - ten" with its original transformer returned. It probably can no longer safely deliver the full ten watts, but that's not really a problem.
With that job being easier and more successful than I'd expected I decided to keep going and "re-cap" my workshop Leak Stereo 30. This was bought very cheaply on ebay - "spares or repair". With the view that it would provide
spare parts for another that I have in the house. I'd ordered the capacitors from RS and decided to get axials, as originally used, so I spent a couple of hours pulling out the old, and bending and fitting the new. The left channel was always a bit weak, so I did that first and checked at the 1/3 and 2/3 count. 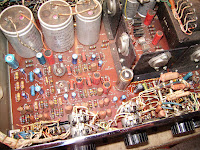 After the first third through the left channel it still wasn't great, but by 2/3rds it was as good as the right channel and with all replaced it was better. So then I did the right channel. Then checked the voltages and currents at the test points and all done. Now it sounds better than the good one in the house. So now I guess I'll have to do that one too. But for now I'll just swap them over :-)
at 6:26 pm

Can a good question change the world?

It's hard to know what really changes the world for the better. Is it good people, or good acts, or good ideas, or, perhaps, good questions?

Why do I ask? Well, in my idle moments I'm reading, scanning and learning the history of the Wireless World Quality Amplifier, the valve amplifier, that gave the British hi-fi in the 1930s and 40s. See here for what I have so far. (I shall be attempting to build a copy this winter).

Anyway it's now well known that in 1945 Wireless World also published a paper by the young Arthur C Clarke of the British Interplanetary Society (oh, and Royal Air Force). Less well known is the question that led to that paper. Here it is - 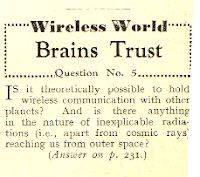 Is it theoretically possible to hold wireless communication with other planets? And is there anything in the nature of inexplicable radiations (i.e., apart from cosmic rays) reaching us from outer space?
(Wireless World, October 1942)

Tomorrow is Blog Action Day. The theme will be Poverty.
at 12:21 pm