It's been a while since I've posted anything about technology from the present century, so here goes -
On Tuesday I attended the London Google Developer Day, I have the T shirt to prove it!
As with last year I don't intend to blog about it in any detail, since there were other bloggers there who are far better at such things than me.  See UK Developer Blog: A blog is born (the official blog) for links to those blogs.
For me it didn't have the buzz of last year, but I don't expect that's likely to be beaten any time soon.  Though for my colleague Angela it was pretty special as she was one of the non Googlers invited to speak.
So what did I learn.  Well that there's a lot of interest in Google's AppEngine, but some folks aren't such fans of Python - why on earth not?  And some folks worry about SLAs but don't have their own on site power generation (OK, maybe that's a Devon thing).  I learnt that GWT is very, very cool and I probably should have been using it for months if not years - so I'll try and fix that soon.  And that I need to watch all the presentations on You Tube ASAP, because it's not enough to just learn more about the things that seem interesting now.
at 8:34 pm

Mullard Five-Ten - out with the old.

Over the last week I've spent evenings removing bad components and replacing with good ones. I found a few old Dubilier 0.1uF paper in oil capacitors that looked sound and measured OK on the test meter, so I've decided to try them. They certainly look the part. I decided it best to buy new electrolytics (except for the large HT filter cap - expensive) - Rifa's from RS look good and have decent specs.

As for the output transformer I've decided to borrow one from one of my Vortexion's. It's far too big (you can see the original in the background of the photo), but it will allow me to try the amp out before spending a lot on a new one, or a rewind of the old one - I wonder how much that might be? These days it always seems cheaper to buy new rather than repair, unless you do the repair yourself. Umm, maybe I need to learn how to wind transformers.

Yesterday I switched it on for the first time, and it worked!  There was a lot of hum and some motor-boating so it was fairly obvious that the 50 year old HT smoothing capacitor wasn't up to the job.  In my junk box I happened to have an LCR 68uF 500V electrolytic that happened to be exactly the same diameter as the existing 40+40uF one, though much shorter  (I peeled off the bright blue plastic wrapper). So I've fitted this as C1 and for C2 used a 47uF 450V axial I had.  Both were bought about 12 years ago, so should be good for a few years yet.  It did the job.  There's still a little hum, though it vanishes completely when the EF86 is removed, so I suspect it's due to the wiring layout. 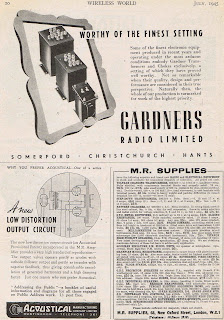 I don't own either of these, but I've been skimming through the many copies of Wireless World I've acquired and came across these adverts. 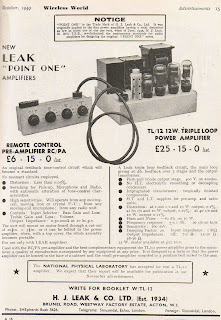 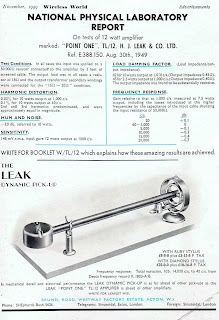