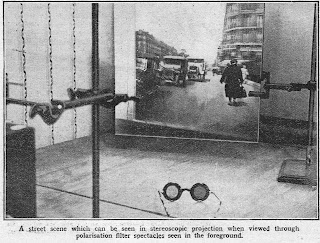 The Wireless World - August 28th, 1936
Stereoscopic Projection by Polarlised Light
Experiments in Manfred von Ardenne's Laboratory
AT this year's Conference of the German Society for Photographic Research, in Berlin, a paper was read by Dr. Haase, of Jena, on new polarising filters and their applications. During the subsequent discussion it emerged that more exhaustive tests and measurements on stereoscopic projection, with the help of the new filters, had been carried on in the 'Manfred von Ardenne Laboratory. At a demonstration at the Lichterfelde laboratory an opportunity was given of seeing the almost startling results given by this solution of the "plastic film " problem. The optical quality of the pictures shown was so good that one felt oneself to be actually standing in the midst of the scene portrayed on the screen.
The idea of obtaining stereoscopic pro-jection by the use of polarised light was, as von Ardenne mentioned at the demonstration, suggested by Anderton a good many years ago. Practical application of the principle, however, failed because at that time there were no suitable polarisers available.
Polarisation Filters
It was not until the appearance of the new " polarisation filters " which have only been on the market a few months that it was possible to produce polarisers in the form of apparently ordinary spectacles, which, however, thanks to the correct orientation of the two "filters " forming the glasses, enable each of the two eyes to pick out only the appropriate image from a composite picture of two images thrown on the screen, each with its light polarised at right angles to the light of the other. Since the image visible to one eye vas photographed by a camera situated a little to the right or left of the camera photographing the image visible to the other eye, the effect on the observer is to give a stereoscopic picture. With the old-fashioned stereoscope, where the two pictures were side by side, the eves were inclined to strain themselves in bringing the two images together. With the present system there is no tiring effect on the eyes, because the two images are merged together on the screen by the projecting apparatus. On removal of the "spectacles," the naked eye sees only one picture (as the photograph shows). This is "flat," with its outlines double.
Completely satisfactory stereoscopic projection, such as was here seen, demands that the state of polarisation of the light should not be changed at the screen. Demonstrations and measurements have shown that this difficulty has been eliminated to such a degree that from all seats of an ordinary cinema the stereoscopic picture can be seen faultlessly.
at 11:44 am