Hiding a castle - no magician required

Update - 9th March. Since posting this Okehampton Castle and Okehampton Primary School have been given their correct locations on Google Maps. Well done Google! Oh and it's now easier to make corrections; see new-way-to-edit-places-on-google-maps.
Search for "Okehampton Castle" in Google Maps, and you'll see something like this - 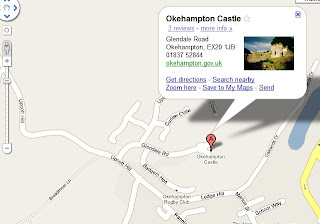 Which looks so very plausible. There's no castle there though! Switch to satellite view and there's nothing to be seen.
Where is it hiding you ask?
Here it is (or yertiz as the locals say) -